From Africa to Harvard

In A Dream So Big 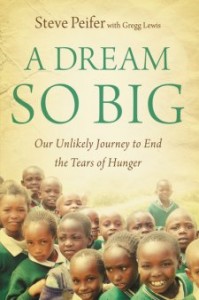 After their third child, Stephen Wrigley, died only eight days from birth, Steve and Nancy Peifer decided to leave their American lives behind and move to Africa. At the time, he was a corporate manager with Oracle who oversaw 9,000 computer software consultants. They moved with their children to Kenya, where they eventually became educational missionaries. (Peifer serves as Director of College Guidance for Rift Valley Academy in Kijabe, Kenya.) They didn’t change continents with any clear mission in mind. It was simply a way of making a break from the past in the hope that they might discover of a new, deeply rewarding life. They did, even if it has been one fraught with enormous obstacles. “My wife is the one who always wanted to go to Africa. We are in Kenya because of her. All the good things that have happened are because of her.” As their publisher describes it:

They didn’t arrive in the service of any divine calling, but the truth of their surroundings spoke to their troubled hearts. A short-term, 12-month mission assignment as dorm parents for a Kenyan boarding school turned this ordinary man into the most unlikely internationally recognized hero.

At the school they help run, they realized that their students needed nourishment more than they needed learning. When they arrived, they found that students weren’t sticking with the program, not because it wasn’t interesting but because they were terribly hungry. “We realized that if we brought food to school, we reduced the drop-out rate from 50 percent to nothing. When the food came, they were little kids again.” In typical humble fashion, buried on their website is this one remarkable fact: “To help kids stay in school, our team feeds up to 18,300 students at 34 schools each school day.”

It’s an astonishing achievement, and yet he didn’t rest there. He and Nancy looked at what their students faced, in relation to the rest of the world, and asked: “How do you progress in a world that has left you behind?”

They realized they needed to create a series of computer centers where Kenyans could connect with the rest of the world. When he told one of the students that he was going to create one of these centers, she said, “I never had a dream so big.” And that has become the title of his new book, being published by Zondervan: “A Dream So Big.” In 2008, he was honored as a hero by CNN. At the awards ceremony in 2008, Tyra Banks kissed him on the cheek when he arrived at the podium and he said, “I just got kissed by Tyra Banks. The odds of someone like me being kissed by Tyra Banks are about the same as the odds of a meteorite hitting this building in about fifteen minutes. So I would start ducking if I were you. ” He’s also won the 2007 Yale Counseling Award and the 2010 NACAC Excellence in Education Award.

He summed up his experience as a missionary during the CNN awards ceremony: “When my son died, I felt I had lost my own life. Kenya gave it back to me.”

Here’s a conversation I had with him recently as he was getting ready to fly back to the United States for a visit:

When you first decided to go to Africa after your child died, you were radically changing your external life, but in a sense you were aligning it more solidly with your core values, right? Did you feel as if you were finally being a Christian rather than just going through the motions, or was it a more incremental shift?

No. I really fight against the whole if you are a real Christian you are a missionary in Africa. You go where you are called to go. In my case, I was just trying to help my wife.

How does it feel to be doing what you’re doing now, compared to what you were doing when you first arrived?

I think I came in pretty ignorant, and moved to pretty arrogant. Right now, I feel pretty broken and therefore more able to try to help when it is appropriate, and to get out of the way and let Kenyans help Kenyans most of the time.

Tell me what you consider your and Nancy’s most significant accomplishments? It might be the work you’ve done on bringing Internet to the people there, or your adoption of children, or something completely out of the box. Only limitation: your answer cannot involve Neil Diamond. (He may rank as Neil Diamond’s most devoted fan.)

I think the greatest joy was Ben and Kate. (His adopted Kenyan children.) I think the biggest accomplishment outside of RVA was building computer centers and that seemed to provide more than computer skills; it brought a real sense of hope not only to the students but the communities. At RVA, seeing the first students get accepted to Harvard, Yale and MIT broke a ceiling and let kids see they could go wherever they were called.

Just amazing, hearing those simple facts. As someone living here in the U.S., watching the news, I wonder if Muslim unrest is a factor, something you’re aware of in your region, as a Christian missionary, and if you feel it’s something that puts you at risk?

We are in a rural part of Kenya and there isn’t much Muslim activity in our area. What is interesting to me is that since coming to Kenya, I have several good friends who are Muslims, and I’m not sure that would have happened in the U.S. We disagree on our spiritual views, but I have found good people who I admire and love.

Tell me a couple stories of your best students and where they’ve been able to go thanks to the school. I know you’ve shaped some students into Ivy Leaguers.

The first of our students who went to Harvard was not someone I felt like I shaped in any way, but he inspired me. What I remember the most about Sam was that he was the most popular kid in his class, but he went out of his way to include the lonely and alienated kids. There were so many girls who wanted to go to the banquet with him, and he went with a pretty unpopular kid just because he had a kind heart. I was visiting Harvard a few years ago and the first RVA girl who went to Harvard wanted me to meet her best friend at Harvard; he was a security guard in his 50s and he was a Kenyan. While she was making sure her room was presentable, the guard told me that she had raised money for his children every Christmas, and I will never forget him telling me that “she thinks I do not know, but I know what she has done.” There is a Scripture about the man who sold everything he had to buy the treasure in the field, and that is how I feel about those kids. In many ways, we are betting the farm on them; I really think they are kids who will change the world.

Do you feel it’s easier to live a life aligned with your values in Africa rather than here in the U.S.? If so, explore that a little.

I think it is a challenge to be a Christian wherever you are, and I don’t think it is harder where I am now then where I was in the U.S. There are missionaries who live in dangerous areas, and have risked their lives because they love others more than they love themselves, but I am not one of them. I admire them. RVA is a very unique place, and I feel very fortunate to be able to live here.

I know that when you were here on that one visit trying to raise money for the cause you had almost no luck getting investors. What is the situation these days?

We are still facing challenges getting monies for our projects. I am a crummy fund raiser. I’m hoping this book catches on and leads some more people to support the work we are doing.

What have been the greatest trials, your worst moments, in your journey since you moved to Africa?

We came here when our older boys were in fifth and second grade. When we were all on the same continent, it was so great. I never had breakfast or lunch with my kids in the states; I was working all the time. When we were all together, I got to see all their games and shows and be home at night; it was so great. Being 8,000 miles from the oldest kids and seeing them once a year if I’m lucky is a searing pain that doesn’t seem to get better with time. My older kids are doing great, but we miss them so much.