Changing the World, One Meal, One Post at a Time 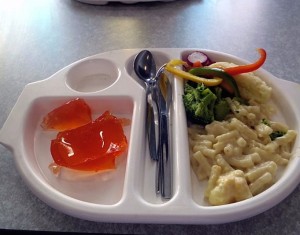 Martha Payne, a nine-year-old Scottish schoolgirl, wanted to make a difference and learn what it meant to be a journalist, so she started a blog about her school’s dinners, which were in her view . . . unsatisfactory. She developed her own rating system including a hair count called “pieces of hair” and ranked her school meals every day. It became a sensation and kids from around the world emailed her photos of their own school dinners. Against opposition from her school, which lasted quite a while (she was told to stop blogging at one point), the food began to improve. And her work helped to support a project called Mary’s Meals in Malawi, as well. You can watch the inspiring and touching video of her talk, where her father takes over when Martha is silenced with stage fright–writers don’t have to be public speakers, right?–at Vimeo. One person can make a world of difference, at any age, in any place. The people she inspired were asked to donate to Mary’s Meals as a way of showing their support of what she was doing. Her father summed it up, amazingly: “Martha’s little blog, this year, is feeding 14,000 people.”