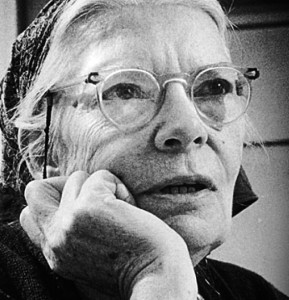 It’s no surprise when American bishops talk about canonizing Dorothy Day as a saint, as they’ve done in recent years. For me, her life embodies the heart of Christianity because of the way she constantly tried to translate her faith into good works. She never stopped striving to make a difference in the lives of other people. She became a socialist at the University of Illinois, and she embraced a left-wing worldview, though she never identified with the way Marxism had evolved as a political reality in the world. Her socialism was really a simple philosophy: an imperative to live with empathy and compassion. She became famous for creating and publishing a newspaper called The Catholic Worker. And during the Great Depression a whole network of hostels called Catholic Worker houses was founded throughout the country to give shelter to the homeless, abandoned and destitute.

Day grew up as the daughter of a journalist and a great-hearted mother, who imprinted a model for Day’s own career when, as a little girl, Day watched her come to the rescue of countless refugees from San Francisco after the 1906 earthquake. Their own home was nearly destroyed by the earthquake, as was the newspaper where Day’s father worked, so they moved to a Chicago tenement, where they lived through hardship until her father eventually found work as a sports editor for a newspaper there. His fortunes improved, and the family began to thrive. But in spite of the increasing comfort of her life, Day’s faith and devotion to social justice began to deepen. She completed her schooling at the University of Illinois and then struggled to find ways to merge her Christianity with her political beliefs. She lived for a while with an anarchist in New York City, but they split when she became pregnant and decided to baptize the child in the Catholic Church. Half a year later she became a Catholic herself. But she didn’t find her true calling until she met Peter Maurin, who was, in almost all respects, effectively a wandering Franciscan monk. He lived a simple, celibate life, praying and studying, but when he met Day he had an insight. He told her she should start her own newspaper, devoted in part to helping the poor, but really to promote social values “that would make it easier for people to be good.”

So that’s what she did. By 1936 there were Catholic Worker houses in 33 different locations around the U.S. For decades, on into the ’70s, Day supplemented her work by participating in protests and demonstrations to urge changes at all levels of American life. She went to jail numerous times, willingly and cheerfully, as a consequence of her activism. In all her activities she struggled to find a way to see beyond herself and her own limited range of self-interest in order to identify with people who had been left behind for any number of reasons, whether through their own fault or because the world had little use for them economically. It all stemmed from her conviction that a human being must be dedicated to something above and beyond individual self-interest.

As she wrote in her autobiography:

Disabled men, without arms and legs, blind men, consumptive men; exhausted men with all the manhood drained from them by industrialism; farmers gaunt and harried with debt; mothers weighed down with children at their skirts, in their arms, children ailing and rickety — all this long procession of desperate people called to me.

Today we must become more aware of the vast population of Americans who live in physical and emotional pain. Globalization and technology are leaving more and more people behind. Greed and materialism drive many of the privileged to take advantage of our imperfect economic and political system while ignoring the plight of those who can’t get ahead in this climate. Once again we need our Dorothy Days to ring the bell and spread the word. More and more of us must see the need to become activists in our own daily lives, finding ways, small or large, to alleviate suffering as she did. In this country there are opportunities around every corner to help someone in need, and making that a priority, as she did, will make our society both more just and more joyous.