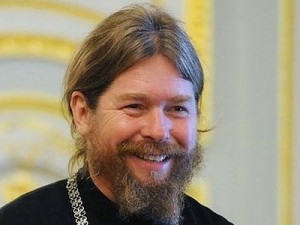 A remarkable book about Russian monks, published last year by Pokrov Publications, reads like something from the middle of the 19th century. You feel transported back in time to the era of Russian faith that gave birth to Tolstoy and Dostoevsky, partly because it takes place almost entirely within a Russian Orthodox monastery.

Yet, the non-fiction tales collected in “Everyday Saints” are entirely contemporary. The book was written by Archimandrite Tikhon, a monk who joined the Russian Orthodox Church not long after he was graduated from film school. He became a monk in 1984, along with a group of his friends, at the Pskov Caves Monastery. At the time, it was a radical move, a rejection of everything the Soviet Union stood for. Religion was tolerated by Moscow, but just barely, and to be a faithful Christian was seen as politically and culturally taboo by the Communist regime. Yet, as he writes: “…for each of us, a new world had suddenly opened up, incomparable in its beauty. And that world had turned out to be boundlessly more attractive than the one in which we had previously lived our young and so-far very happy lives. In this book I want to tell you about this beautiful new world of mine … where even our defeats acquire profound significance.”

If you aren’t intrigued at this point, the book probably isn’t for you, but if you stick with it, the book offers rich rewards. Much of the book brings back scenes from my childhood in the Eastern Orthodox Church, in Romania, as I describe them in The Constant Choice. One story in particular I found especially moving. It’s essentially a profile of Father Gabriel, “the undisputed overlord and master of the Pskov Caves Monastery.” He’s portrayed as a crusty, overbearing, almost tyrannical enforcer of the monastery’s rules, with a flowing beard and a long walking staff, a figure from the Old Testament, or J.R.R. Tolkien, even. In a modern world, where individualism has become almost a form of faith, his autocratic leadership wasn’t welcomed. His courage was. In some scenes, where he stands up fearlessly to KGB agents who are trying to turn one of the monks into a collaborator, Gabriel shines as a defender of his brothers. He bursts into the KGB offices, lifts his friend from the chair and leads him outside. No one stops him, and the KGB never meddles with the monastery again. Yet, during his harsh rule, 10 monks protested what they considered his excessive discipline and left, demanding that he be removed. He wasn’t, and they stayed away. Years later, one of these rebel monks, in retrospect, praised Gabriel for the wisdom of his behavior. As Tikhon reveals in his story, the abbot wanted nothing more than perfect obedience: to God, to the task at hand, to the sacrifices required by faith. Obedience to his own authority was the least of his concerns. He was teaching an obedience to the requirements of the life his community had chosen. Yet the book takes place in a time, our time, when obedience is almost seen as weakness or cowardice or timidity: “There are fewer and fewer real novices left who will obey.”

This struggle to be obedient, for Father Gabriel, was a path toward self-knowledge:

One must discover the truth about oneself, and see oneself as one truly is. You must meet your own self. And believe me it’s the most important acquaintance. A vast number of people live their lives never even bothering to discover themselves at all. Sometimes we have only the vaguest notions or fantasies of who we are, and so depending upon our own vanity, pride, resentments, and ambitions we see nothing … truth comes only to us through honest examination of oneself. Through true humility.

And you achieve that examination and honesty through successive failed attempts to obey your own values — to do good, essentially — and, in this case, live by the rules of a particular religious order.

Humility, as it turns out, is what he was trying to teach through all that apparent tyranny. Eventually, his methods led to his own exile from monastic life. He was no longer tolerated. He was judged to have been too harsh. So he was forced to live as a gardener among his parishioners, weeding and guarding their little crops, then living frugally during the winter on the money he made in the summer. He became a peasant, essentially. Eventually, after serving his time this way, he was invited back into the monastic order. When the book’s author met up with Father Gabriel after years of this exile, and his eventual return to monastic life, Tikhon asked him to recall the happiest period of his life. He described vividly the period when he had been most humbled:

The very happiest times of my life were the years when I was suspended and disgraced. Never before or since in my life was the Lord as close to me as back then. My prayers, and most important of all, my sense of the closeness of Christ, that closeness I felt when I was in my gardens, was unique and cannot be compared to anything else.

That kind of surrendering obedience was essentially all he’d been trying to impart to the monks who found him so difficult and objectionable. Instead, they blamed him for the discomfort they felt at simply doing what was required of them by their own faith. If they’d been a little more obedient to the demands of the life they’d chosen, they might have found the joy he discovered in his gardens, down on his hands and knees pulling weeds from between someone else’s vegetables and flowers. If Father Gabriel had learned from those “lilies of the field” right from the start, and found a more compassionate way to exemplify humility, he would never have gone through the ordeal he faced as a leader.