Fast, but good for you 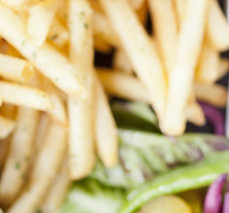 We have a major, serious health crisis. It’s called obesity. We need more fruit and vegetables. We need more lean protein. We all know this. But we also need fast food. Wait. What? In the new issue of The Atlantic, David H. Freedman has a proposal for how to lower America’s weight problem. His solution: processed food. He does an amazing job of tinkering with everything you thought you knew about what to eat. In a delightful, decisive way, he turns your distrust of processed food inside-out, and, in the process, he offers a well-reasoned strategy for tackling the obesity epidemic within an industry that’s been branded as the enemy of health.

In part, the article aims more than a few of its arrows at vocal advocates of healthful eating like Michael Pollan and Mark Bittman. They both champion wholesome foods by condemning the consumption of anything involving human engineering. For the Pollanites, as he calls them, the fast-food industry has purposely addicted us to sugar and fat and artificial ingredients, the way the tobacco industry induced us to smoke. You know the way it goes: if you can’t pronounce the ingredient’s name, don’t eat it. Well, that’s no longer true. And it hasn’t been true for a while now.

• You can get fat buying products from Whole Foods and Trader’s Joe’s. A Vegan Cheesy Salad from Whole Foods contains three times the fat content per ounce as a beef patty in a Big Mac. “You can take in obscene quantities of fat and problem carbs while eating ‘wholesomely’ . . . ” So-called wholesome food dishes can be just as bad for you as high-fat fast food.

• We need to get more vegetables, fruit, legumes, whole grains, poultry and fish into the food chain that most of us frequent — fast food restaurants. It’s happening already. The Charbroiled Cod Fish Sandwich at a Carl Jr. in East L.A. “was the best meal I had in L.A. and it was probably the healthiest.” And it was selling. Not a lot. But enough.

• The fast-food industry is highly motivated to provide enticing and healthful offerings and has been doing so for many years, with some success. It should be encouraged to move strongly in this direction.

• The trick is to get people to eat healthfully incrementally, slowly, in stealthy ways, in the places where they actually eat now. Don’t try to get a McDonald’s customer to shop at a farm market. Keep him coming to McDonalds, but improve his diet when he’s there. Don’t tell him he’s eating something that’s healthful! It actually inhibits sales.

• The Pollanites are, in some ways, inhibiting our progress toward better health. “They are threatening to derail the reformation of fast food just as it’s starting to gain traction.” Chef Dan Coudreaut, the head of culinary innovation at McDonald’s said that he can create processed food that is far more healthful or he can increase the fat content in a dish. The healthful dish is simply more processed — but that isn’t a bad thing. Freedman writes: “That the chef with arguably the most influence in the world over the diet of the obese would even consider adding fat to his menu to placate wholesome foodies is a good sign that something has gone terribly wrong with our approach to the obesity crisis.”

Here’s the good news. Science has developed healthful ways to create food that is just as appetizing and satisfying as junk food. It’s doing it by breaking down the sensory characteristics of a meal. Companies are now devoted to increasing the length of time a flavor lingers on the tongue — which is part of how fat affects flavor. It’s called a food’s “temporal profile.” Textures can be mimicked successfully by a company called Tic Gums. “Tic served me an in-development version of a low-fat salad dressing that was better than any I’ve ever had.” And Domino Foods now sells a low-cal combo of sugar and stevia that takes away the “licorice note” in stevia, a natural sweetener gaining widespread acceptance.

Bottom line: lower-calorie processed food that’s actually healthful and nutritious can be offered to consumers through the channels they love. For the privileged few, that’s Whole Foods. But most people can’t or won’t shop at Whole Foods. For the vast majority, meal time means Burger King and McDonalds. That industry will improve slowly, if it’s encouraged to re-engineer it’s menu, one dish at a time. “It’s (a step) the obese are more likely to take than they are to make a big leap (entirely) to wholesome or very-low calorie foods.”

Freedman’s call to action? We need to push the health-care system to provide incentives and support for the obese to lose weight by making very small changes: switching from Whoppers to turkey burgers and from Egg McMuffins to Egg White Delights. He also suggests incentives to make the best choices. For example, still in contrarian mode, Freedman says we need to refuse Mark Bittman’s recipe for butter-heavy, sugar-rich blueberry crisp. Instead, he suggests we buy a McDonald’s fruit-and-yogurt parfait. It’s on Bittman’s black list, but it shouldn’t be. It has proportionately less sugar than an apple.

Just one caveat to the fast-food revolutionaries: tell the consumer how good a healthful dish actually tastes and save the fact that it’s healthful for the foot notes. Studies have shown that consumers don’t like to be lectured when they’re hungry. All they want is the satisfaction. Helping them lose weight is just a bonus.

Do you agree that we ought to use our engineering skills to create foods that taste great and are also nutritious rather than insist that everyone rely on whole, unprocessed foods?