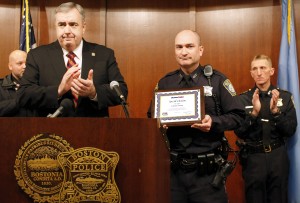 In the wake of the shooting at Sandy Hook, we’ve heard about teachers and staff who went to heroic lengths to save the lives of children. In fact, I’m going to be writing briefly about it the Huffington Post. Yet one thing to keep in mind is that people do heroic things every day. A police man in Boston named Ed Norton, without a second thought, leaped into the freezing water of Fort Point Channel, in the city, to save a woman who was already in the river, crying for help, clinging to a raft.

It wasn’t clear how she’d gotten into the water, but as soon as the officer heard her cry he dove into the channel from a balcony jutting over the water—plummeted a couple stories through the air before hitting the frigid water.  The Boston CBS affiliate showed film of the rescue. According to the report, Keith Young, a UPS driver who stopped on a nearby bridge, saw the officer arrive, park his cruiser, and walked to the railing, stepping off into the air without hesitation. “I heard everybody screaming, she’s in the water, she’s in the water,” Young said. “She was conscious and crying hysterically. I saw bruises on her knees and arms. He didn’t think twice. He’s a hero today. ”

Once he was in the water, others on the balcony tossed him a floatation ring. He swam with it out into the middle of the river where she was holding onto the raft, and brought her back to the bank where they were helped out of the channel by a State Police boat and three Boston firefighters. As they came up the steps, the on-looking crowd cheered and applauded. The woman was treated for hypothermia and was expected to recover, thanks to someone who did what he felt he had to do for another human being in peril.  Choosing to be a good person really matters. Whether it’s an act such as Norton’s, or simply all the small good choices we make every day, it will get us to a better place. Tell us about people you know who have done something exceptional for another human being, whether it’s a family member, or a stranger.