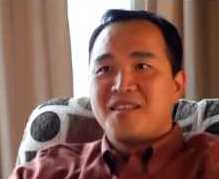 A fantastic book came my way not long ago, and it turned out to be a reminder that the classic American success story still holds water. In this case, a whole lot of water. Maybe it seems powerful and true because it reminds me of my own history: an immigrant child comes to this country and works his way up and into the system, finding what has become a rare kind of success through hard work and the help of others.

Both liberal and conservatives should cheer this book, and consider it when thinking about the issue of immigration. I’m talking about Where the Wind Leads, an autobiography by Vinh Chung, with Tim Downs, the story of his family’s harrowing journey as “boat people” fleeing Communist Vietnam in the wake of our defeat in the 70s. To say it’s remarkable, and delightfully written, is understatement: it’s an emotionally gripping story at a rare level of fascinating detail, much of it about events decades old.

Chung comes from a successful, wealthy family of Mekong Delta rice merchants — the company was named Peace, Unity, Profit. His grandmother began by scrounging raw rice from the wild, scooping handfuls of it and bringing it home, milling it with a mortar and pestle and then selling a portion on the street — while saving the rest. Slowly, she was able to save money, as well as rice, and began to pay for others to mill it, finally building a company with its own mills, one of the most successful concerns in the Mekong Delta.

Chung’s father served as its C.O.O. Anyone who thinks Communism has been a benign presence in the world should read this book. As I know from my own childhood, nothing could be further from the truth. When Vietnam fell, the Communists confiscated much of the family’s property, shut down the company and devalued the nation’s currency: wiping out the wealth of those successful enough to earn and save it. They moved to a few acres that had served as a place for a getaway cottage, now a tiny farm, until the hopelessness of their future drove them to flee on a flimsy boat, with nearly 300 other Vietnamese. They were among the wave of highly publicized “boat people,” many of whom died on the ocean. After encounters with pirates, abuse at the hands of Malaysians where they briefly landed and another dire brush with starvation and dehydration back on the ocean, they were rescued by World Vision, a group devoted to saving the boat people.

They ended up in Fort Smith, Arkansas, a family of, eventually, eleven children, where many, at that time, considered Asians as either considered “gooks” or kung fu masters. Chung’s father, once rich, worked hourly factory jobs until, after a decade of misery, started his own restaurant. Their lifelong struggle was to simply stay in the black, as all entrepreneurs will understand — not to get rich, but simply to pay the bills. And they did. It’s the classic conservative dream of American opportunity: work hard, be honest and stay afloat. All along, as well, they went to church every Sunday: Chung’s father converted to Christianity on the ocean, thanks to the fact that he was quite literally saved by World Vision’s compassion. Growing up, Vinh was just as hard working as his father, mother and grandmother. He was good in sports, and in math, yet his entire life was a grueling routine of simply waking up, going to school, practicing on the field, working in his father’s restaurant and then studying at night. A girlfriend? Where was the time? What would that cost?

Yet from such hardscrabble circumstances he emerged: Harvard, medical school, Fulbright scholarship and now a successful dermatology practice in Colorado, with a family of his own. Despite all his initiative and hard work, he credits others with his success. His family had to be on welfare to make ends meet. He got an incredibly generous financial package from Harvard. And he was picked by the Soros Fellowship for the largest gift of financial assistance he had ever received. “As I found when I came to America, you have to work yourself to the bone in order to succeed, but you also need many helping hands along the way,” he says. Both the right and left hand.

As he told us, “I never felt I belonged in this country. I always felt I was at the mercy of others: for scholarships, for help from the government, for the help from many others. When I got the Soros Fellowship it changed everything. I felt I was as much an American as anyone else. That was 2000 or so, early on in my career. It was the most generous gift that I know of, probably still is, for graduate school. I’ve been indebted to them for supporting me and believing in what I was capable of doing. Now I’m a legitimate doctor, and I’m finally independent. I can help others. So I reached out to World Vision. We’re helping dig wells in Rwanda, and saving kids who are being sexually exploited. After a talk I gave, in 2012, I was encouraged to write a book and sit on the World Vision board. All that I make from the book will go to World Vision.”

It’s a story both sides of the aisle should applaud. It’s how America is supposed to work — and still does work, all appearances to the contrary.