Life with the bigger Elvis 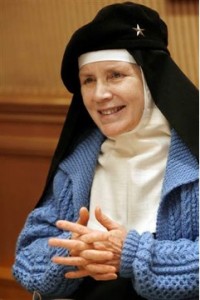 Dolores Hart was the first woman to kiss Elvis Presley on screen. Successful, beautiful—and in love with a man she intended to marry soon—she left it all behind, not long before her wedding day, to become a nun. If you want to know more and you get HBO, watch God is the Bigger Elvis, an Oscar-nominated documentary about Hart which is beautifully filmed and all too brief, at only 40 minutes.

When she chose the cloistered life at a Benedictine abbey in Connecticut, she was a rising star in Hollywood. She was getting one plum role after another, and she’d been picked for a role that required her to make out with Elvis Presley. Nice gig if you can get it, for an actress. On Broadway, though, with George Peppard, the schedule wore her out after nine months. She was told to take a brief retreat at a Benedictine abbey in Connecticut. Already a Catholic, who prayed to get every role she wanted, she wasn’t keen on the idea of hanging out with nuns.

“I said I don’t want to go anywhere there are nuns. I was told, “Oh don’t be so stiff. They’re very easy-going nuns. Just go for a few days and rest. Try it. Their contemplative. They won’t talk.” I came (to this abbey), and I really loved it. It just felt peaceful. I knew I was myself (here). I could find my own inner certitude. The concern I had was that it was wrong as a Catholic to be in the movies because sexually you could be aroused by boys and be involved sexually with men. And my lead star was Elvis.” She asked the mother superior about this, who told her: “Well, why not? You’re a girl. Chastity doesn’t mean you don’t appreciate what God created. Chastity says use it well.”

“I came away with a sense of interior renewal,” she told the filmmakers. “I said, ‘I’ll come back.’”

In her twenties, her life plummeted forward into roles alongside Brando, Warren Beatty, Montgomery Clift, and may other famous names and faces—as well as contracts that would soon make her worth a million dollars per role. Yet, in the back of her mind, she was dreaming of going back to the abbey.

“Love is the mystery I found here. For me, prayer is holding a constant openness in my heart . . . The first couple of times I came to the abbey I said to the reverend mother, do you think I might have a vocation here. She said, ‘No don’t be silly. Go back to your movie thing. You’re too young, This wouldn’t be the thing for you.’ I was so happy. I fled.”

She went back to her career, met Don Robinson, and after three hours of conversation during their first date, he asked her to marry him. She put him off and they dated for five years. In the process, she fell in love with him, and they got engaged. Not long before the wedding, she received a letter from the abbey telling her that if she was going to return, now was the time to do it. Robinson recognized what she was thinking. He asked if she was going to return to the abbey, and she said yes.  Though she loved her fiance, she found the monastic life irresistible.

At this point in the movie you realize you’re watching something incredible, something that seems to come from Hindu or Buddhist traditions, where a certain small segment of society is expected to see through the illusions of the world and retreat into a life of meditation. It isn’t much of a Western tradition, where nuns are often viewed with curiosity and derision. Her passion for the near-silent energy of the cloister overwhelmed her love for Robinson, and she joined the order.

The film follows the rest of her life, with film clips that suggest how difficult the transition was for Hart, how long it took for her to disengage herself and fully give herself to the austere goodness of her new home. It was and is a life without distractions or relief from a monastery’s rigorous simplicity. Decades later, Hart would describe it as being “skinned alive.” Another nun says, “It was twenty times harder than I could possibly have imagined.”

Don Robinson, though unable to marry her, remained true to her the rest of his life.

“I never got over Dolores. If it was my doing, I would be married to her today. I eventually understood why she came here. She wanted to marry God,” Robinson says, filmed on one of his last visits to the abbey. (He died not long after the film was shot.) He had been returning regularly to spend time with Hart for nearly fifty years, and he’s shown walking with her around the grounds, holding hands.  It’s astonishing to see the power of the love that drew her to the abbey and, as a result, the love that drew Robinson to remain faithful and devoted to this remarkable woman.

The transformative discipline of Hart’s life becomes vividly real in the film. In a scant 40 minutes, you’re led through a process of spiritual redemption and illumination that’s breathtaking and, in the end, it comes to seem almost ordinary and everyday. Just watching the movie conveys a sense of vital, energizing peace. It’s a wonderful counterpoint to many things happening right now in the world. Not the least of which is that it’s a still small voice of truth about religion at a time when obscene intolerance and falsehood about Islam, in a post to YouTube, have incited violence across the Middle East. It’s a beneficently corrective little film, and it deserves any award it receives.

The film vividly conveys the sense of quiet attentiveness to the most humble activities in life in a tiny community where ambition and possessions and worldly achievement are nearly meaningless. It shows how a small group of women have found renewal not so much in doing good for others, but in simply being good. How, in your own life, so you find opportunities to make goodness an end in itself, through activities that have no impact other than on your own character?