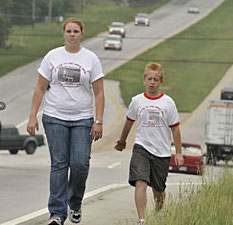 In 2004, when Zach Bonner was only seven years old, he wanted to help the victims of Hurricane Charley where he lived, near Tampa Bay, Florida. He pulled his red wagon around his neighborhood, asking for donations of supplies, food, clothing, water, tarps any kind of household good that might bring comfort to someone whose home had been ruined by the storm. Eventually, with a little help from friends, he collected 27 truckloads of relief supplies. His compassion and generosity inspired people to create a philanthropy around him, dedicated to helping homeless children. A feature film about his quest, Little Red Wagon, directed by David Anspaugh (Hoosiers) came out in 2011. Looking for a film subject, the Philanthropy Project, a not-for-profit organization, picked this boy’s story from thousands of candidates.

Bonner deserves the honor. He’s a remarkable kid, who has the tireless dedication of someone far more seasoned. After his initial walk for Hurricane Charley, he founded his Red Wagon Foundation to aid the 1.3 million homeless children in the United States. Bonner said that, “These kids don’t have a home, they don’t have a safe place to sleep at night. They’re out on the streets not because they want to be, but because it’s out of their control.”

And he just kept walking. His next big trek was called “My House to the White House” and required three separate journeys. In 2007, Bonner walked 280 miles from Tampa to Tallahassee. In 2008, he began in Tallahassee and walked 250 miles to Atlanta. In the final leg of the trip, he walked 668 miles from Georgia to Washington, D.C. It wasn’t long after he finished that Bonner announced a March Across America. From March 23 to September 14, 2010, he essentially crossed the nation on foot: 2,448 miles from Tampa to Los Angeles.

The New York Times offered a vivid description of Bonner, as he neared his destination:

He cuts a tiny figure in the vastness of the upland desert, the expanse of scrub and brush and saguaro cactuses and red ragged mountains. He is a red-headed boy with a sunburned nose and sunglasses, and he moves with a step not graceful, nor terribly fast, but steady and determined, his mouth set in a hard line. The boy, Zachary L. Bonner, has walked nearly 1,950 miles from his home outside Tampa, Fla., to this spot in the desert, and he intends to walk another 500 miles or so to the Pacific Ocean, all to raise money for homeless children. At 12-years-old, he is something of a prodigy among do-gooders.

He has the life of a mover and shaker, but he does everything with the open heart of a kid ready for adventure. His voicemail and email are constantly clogged. He gets up at 4 a.m. because he has so much to do. And yet still plays baseball and hangs out with his friends like other boys his age. He doesn’t simply help others because it’s a good thing to do, but because it’s fun. As he told the Tampa Bay Times “I can only do the foundation as long as it’s fun and something I enjoy doing. When it stops being fun, it may be time to stop doing it.”

Is it true that what a person considers fun indicates a lot about his character? In this case, for sure. Not everyone can walk across the United States to help homeless kids, but anyone can donate or volunteer to help with a homeless shelter. Have you been involved in an effort like this? How far would you walk to help a child in need?