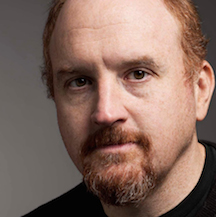 I cleaned this up a trifle, but this is fairly close to what Louis C.K. said in the latest episode of Louie. It was part of the stand-up segment at the club, in the middle of the episode, where he always reaches back and touches the brick wall behind him as he talks, as if he’s trying to keep his balance or ground himself, the better for a punishing lightning bolt to pass through him. It’s a great way for an agnostic to express his hunches about the world and be absolutely clear about the nature of faith and the limits of knowledge:

Applaud if you think you’re going to heaven. Yeah, you think you’re going? You’re 28 and you’re a lock on heaven?  You’ve done enough good in your ten adult years that you can’t possibly . . . well enjoy it. I don’t think there’s a heaven. There may be a god, but not a heaven. God is the best news you’re going to get. (God says to you, when you meet Him:) “You think I made a whole universe and then a whole other amazing place forever after that? How much do you want from me?” I don’t know if there is a God. I think that’s all you can say honestly. All you can say is that you believe it. I envy people who have faith. They wake up, and God’s right there with them. I wake up and there’s nobody, just bad breath. I don’t think you can say there’s no God. Boy that takes a lot of confidence. To say “Nope there’s definitely not a God. Doesn’t seem like there’s one, so there’s not one.” How can a human being think they know there isn’t anything? You can see for a hundred yards, tops. God might be right behind you all the time, just like . . . (pretending to be God, he waves his hands in the air in a way the person he’s following won’t see.)