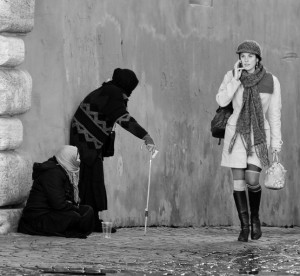 A recent study by Oxfam published this startling statistic: the wealth of the 85 richest people in the world equals the wealth of the 3.5 billion poorest. It’s a dangerous set of numbers, because when the global economy keeps widening the gap between rich and poor, societies get more and more unstable. In this post from 2012, my first at Huffington Post, less than a month before the Presidential election, I addressed this issue and called for action based on the urgency of the problem, not politics:

A nation is a family. Like a family, a nation offers support to the member who, in turn, support the family — pay taxes, remain loyal, and maybe even defend the homestead when needed. What this big family called a nation owes its members varies depending on its resources and state of well-being. The point is, we’re all children of this union and we’re being forgotten.

Few would disagree that this family of ours is in a state of crisis. Politicians and the media too often describe our current situation as an economic crisis, a job crisis, a crisis of confidence and more. The real question, not asked, identified or discussed, is the status of most of the nation’s citizens. How are the people doing? What are the needs of different groups of Americans? What does the nation owe its citizens in this time of crisis? Are we a happy family or a dysfunctional one?

Today, our debates and disagreements about the state of the nation focus too often on abstractions and ideological differences. Meanwhile, we’re forgetting the well-being of ordinary people. Framing America as a family problem can center attention on the real issues, the real priorities, the urgent needs of ordinary people. Here’s the problem: No one is addressing the deep and growing chasm between some 10 percent of the well-off, who are doing better than ever, and the vast majority of Americans, who aren’t. Unless we act quickly and decisively, this gap will continue widen. Equality of opportunity, so much a centerpiece of America’s democracy, and its heritage as a core value, is increasingly becoming an empty myth. The educational and developmental opportunities for people from different economic strata are growing distressingly unequal.

The central question we need to ask is whether or not this family of ours needs to care about all of its members, or only the ones who are already the best provided for. If that’s not the role of a nation, the alternative is for citizens to treat the country as a hotel — a place to eat, sleep, to do business — before moving on. It’s a question of whether or not we’re all in this together or simply in it for ourselves. If it’s the latter, then only the stronger, and wealthier, will survive. Is that the kind of world we want to live in?

Today, too much of the political rhetoric has completely forgotten that we’re a huge extended family. It’s mostly about tactics designed to appeal to the respective political bases. Big government versus small government, to raise taxes or lower taxes. These can be vital actions and principles depending on the zeitgeist. Freedom for example has no meaning as an absolute. Freedom can only be useful in society when connected with certain specific responsibilities toward others.

The most meaningful debate right now would arise if we stopped arguing about tactics and ideology and started to talk about the actual well-being of individuals living in this country. Everything. The facts are out there. Based on this information — unemployment, average wages, level of household debt — we could initiate practical, pragmatic, steps toward helping people live better lives, right now, not four years from now. But it has to be bipartisan, stripped of political ideology and tribal rhetoric.

The future of America can be bright. But only if we agree on the kind of nation we want to be. Will we choose to help the less fortunate, the weak and the vulnerable? Should we help the unemployed through training and retraining? Should we provide some conditional support for people between jobs? Should the Federal Government play a major role in our grossly inadequate and uncompetitive public education? How should we address our energy dependency challenge? The force of technology which turned against America’s interests, elevating productivity and profit over employment throughout the last couple of decades in favor of cheap mass labor overseas will soon be losing momentum. Jobs need to return to American soil and they will. Soon, technology can enable manufacturing in small centers, efficiently run, provided our work force will be properly educated and significant investments will be made in infrastructure to replace our crumbling highways, roads, bridges, railroads and airports. Can’t those on both sides of the aisle agree that this is the most urgent task ahead of us — to find a way in which the private and public sector can work together to grow the economy and encourage business to expand right here? It’s working in Germany.

The current paralysis of competing alternative tactics is untenable, where the focus from both Republicans and Democrats is to simply repeat talking points that justify a political stance rather than offer genuinely creative solutions. We need to come together as a family again, abandon the sibling rivalry. We simply cannot afford to distance ourselves from the problems of average people who are growing ever more weary of empty political rhetoric from both sides. Global competition will dim our prospects the longer we procrastinate.

One more thing. Regardless of the resolution of this debate, the nation must act with wisdom and courage in getting its affairs in order. We must learn the difference between costs and investments. America’s business is, by and large, still the leader in the world. Creativity, productivity and efficiency are among the vital drivers of our business success. The U.S. Government and Congress must be held to similar standards. We need the courage to break through bloated bureaucracies, crippling inefficiencies, ineffective programs and the corruption generated by an avalanche of all campaigns in Congress and the presidency.

As members of this generation in the American family, we need to do some housecleaning and take on difficult responsibilities and obligations. We need to find creative new ways to make both government and business work, and work together as partners, because the future of this family’s children and grandchildren are at stake. The time to starting thinking and taking action is now, so that the momentum has already gathered before we get to November. Please let the debate about the real issues begin.