In A Sincere Compliment 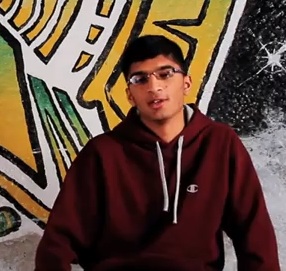 If you want to feel better about the human race, you’ll get a quick infusion of hope by following @WestHighBros on Twitter.  Scroll down the feed and in less than a minute you’ll be beaming. And you may also be thinking that this is how everyone should be using Twitter. Each tweet is nothing more, nor less, than a specific compliment, a little sound byte of detailed praise for an individual student at West High School in Iowa City.

The Twitter account was started by Jeremiah Anthony and two classmates in response to cyber bullies at another school who were tweeting cruel insults directed an other students.  Since last October, Anthony and his two buddies have sent more than 3,000 shout-outs that are beautifully precise. In that brief time, the account has attracted 5,000 followers. A few samples:

@QuisssaChuu really admire how you always worked until you achieved the goals you set for yourself. Also awesome tattoos.

Incredibly spirited and intelligent. You’re always reaching out and sharing your wonderful smile. You’ll be missed next year. @bahbahra19

@ValerieHsieh you not only impress us with your sense of humor, but also with your relentless journalism skills and work ethic. keep it up!

The modus operandi is pretty simple. Identify a student, follow him or her on Twitter or Facebook, and get to know them well enough to say something nice that applies to that individual’s strengths and virtues. Sometimes the compliments break away from the student body and are sent to the school administration and even the local newspaper. A video about Anthony and his effort, “A Sincere Compliment,” can be found at Hooplaha, a website created specifically for spreading good news. In the video, Anthony explains his motivation beautifully: “I built this up by first complimenting people I knew, and they told their friends, and pretty soon we built up a following. So many people on Twitter and Facebook get cyber bullied because they are less than perfect. Nobody is perfect. So we try to make compliments as sincere as possible. I try to say, you’re much better at this than you are bad at that.”

Virtually everyone at the school loves the tweets and admires the initiative’s founder. Says fellow student, Alli Peterson, “Jeremiah is extremely caring and kind, and he’s made a huge difference in our school.”