The Goodness of Gump 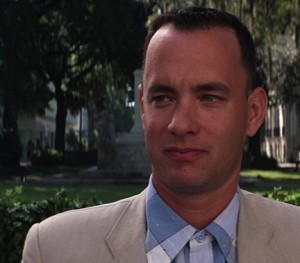 When Forrest Gump first came out, I had a friend who said this film, more than any other one she’d ever seen, spoke to her about pure goodness.  Though I hadn’t thought of it quite that way when I saw it, her words rang true back then and they seem even more accurate now that I’ve watched the movie again. It’s been showing on cable recently, and if you have the time, watch it again. It’s a tale about a challenged man whose simplicity and honesty invite persecution and scorn, and yet he responds to everything and everyone with love and devotion. The only time he raises his hand to another person is to defend a victim who’s being threatened.

The movie follows his course in life as he does one remarkable thing after another, stumbling (or running) into one historic event after another. Again and again, without credit, he alters the course of history: teaching Elvis how to dance, suggesting lyrics to John Lennon, meeting two Presidents, helping to expose the Watergate burglary, investing in Apple Inc. during its early days, and earning a Medal of Honor in Vietnam for his selfless attempt to save everyone in his company from incoming enemy fire.

All of these playful liberties with history are window-dressing. What comes through again and again, in the remarkable performance from Tom Hanks, is Gump’s goodness. Gump succeeds eventually through diligence, persistence, obedience, prayer, and simple good will. Without thinking, he charges into a jungle overrun with enemy combatants to find and save his best friend. In the process, he saves another man, his lieutenant (played by Gary Sinise), yet turns him into a foe: his lieutenant would rather have died heroically than be forced to live without the legs he lost in battle. He blames Gump for a life of disability. Gump’s attitude of admiration and respect and generosity toward the lieutenant, despite the bile and anger the officer vents toward Gump, is one of the touching ways the movie dramatizes Gump’s goodness. The officer’s invective doesn’t stick. It’s as if Gump doesn’t even hear it—that’s how focused he is on the lieutenant’s welfare, even when the officer loathes him. The same goes for Gump’s love of Jenny, who turns out to be a hedonistic vagabond who keeps searching for happiness anywhere other than in Gump’s arms. He’s not good enough for her until the end, after she has contracted AIDS and is dying, when she agrees to marry him. No matter how many times she left him for someone else, he never stopped loving her selflessly, and he loves her to the end, asking for nothing from her in return.

It’s a fable, and it’s often funny, yet the movie is hauntingly real. Like so many great films, it makes you feel the passage of time—which means it conveys a sense of continuous loss—in almost every frame. Yet, in every scene as well, you aren’t far from the encouragement of Gump’s honest, benevolent face: which seems utterly indifferent to what life takes away from him. In other words, there’s something both heartbreaking and totally uplifting in Gump’s character and life. It shows you in every scene why goodness matters, how it can make you vulnerable and set you apart, and also why being good is the only way to be genuinely invulnerable, in a much deeper way. When you’re good, as Gump is, what others think or say or do becomes irrelevant. What you could lose is also irrelevant because being good is all that matters and nothing can prevent you from choosing it. The movie shows how being good is the only real way to be fully human. You begin by thinking that you’re watching a story about a challenged, limited, slightly absurd man, and by the end, you realize you’re watching someone we all should aspire to be. Being good is rarely about what you know or how much you make—Gump knows very little and seems utterly indifferent to money and possessions. Instead, his life makes us see the best qualities, and best choices, available to anyone: character, loyalty, caring, honor, and a willingness to help others whenever possible, even if it means risking everything.